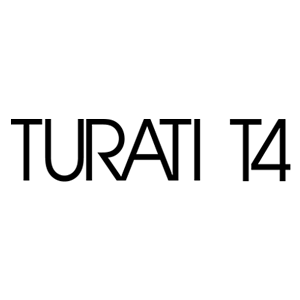 Turati T4 began business in the 1960s, in an area called Brianza, about 20 km north of Milan, where many of Italy’s major furniture manufacturers are located. It was in this area and during this period, thanks among other things to the extensive availability of qualified and skilled workers, that the cooperation started between manufacturers and designers that was to lead, in the following decades, to the development and creation of “Made in Italy” in the furniture industry as well.

This period also marked the start of collaboration with architect Angelo Moscatelli who designed between the ‘70s and 1990 specific products for the living area. In 1990, in conjunction with architect Martino Perego, the TRIPLO program saw the light. This was distinguished by strong compositional flexibility to cater for the needs of designers and interior decorators. Since 2007, the program has been developed and directed by the designer Giuseppe dell’Orto.

While design, craftsmanship and quality were key features of the creative path of the ‘90s, it is in recent years that product identity has become increasingly more associated with technological innovation in order to interpret the requirements of home living areas in which technology and our need for wellbeing play an increasingly more important role. 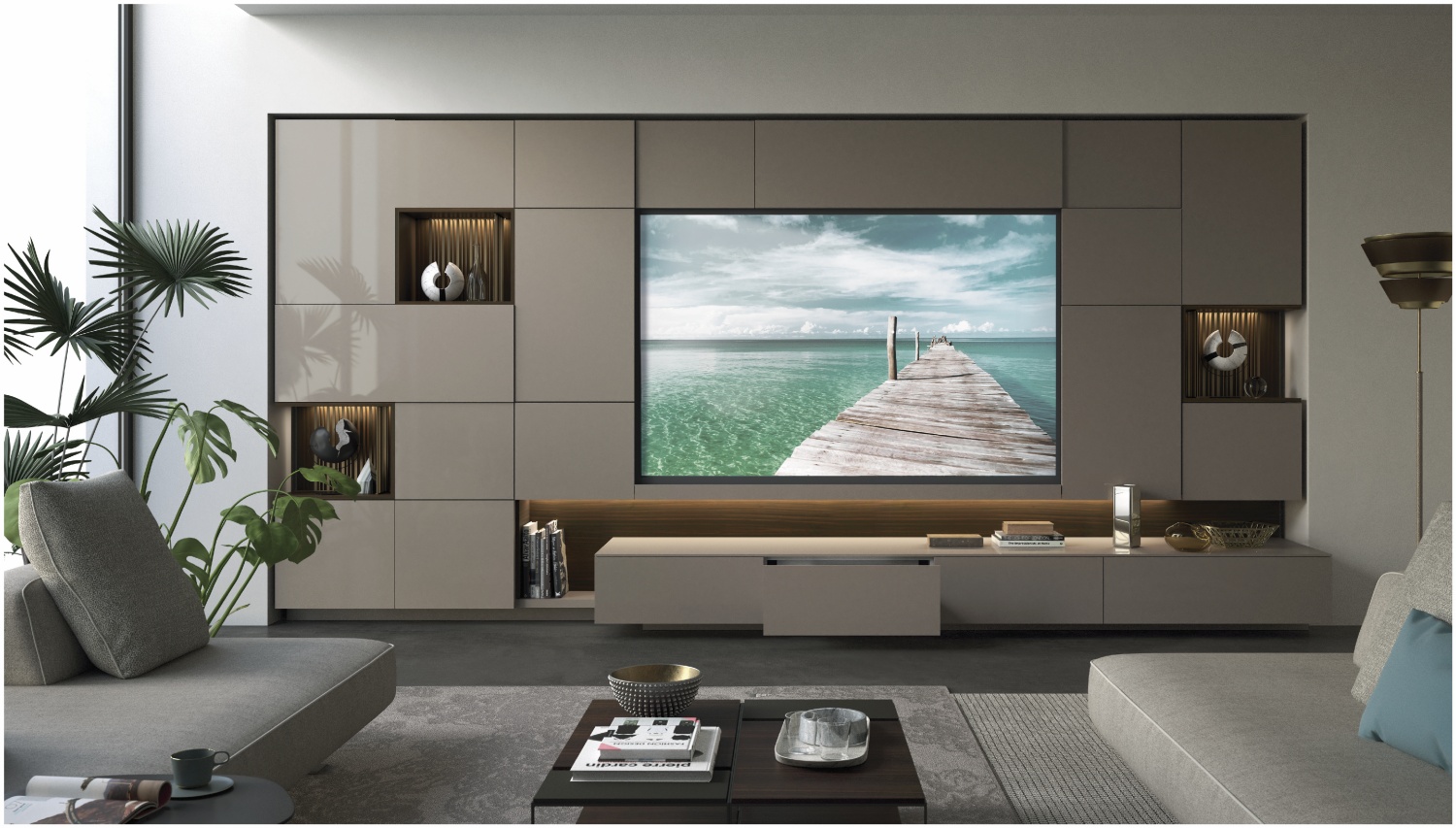 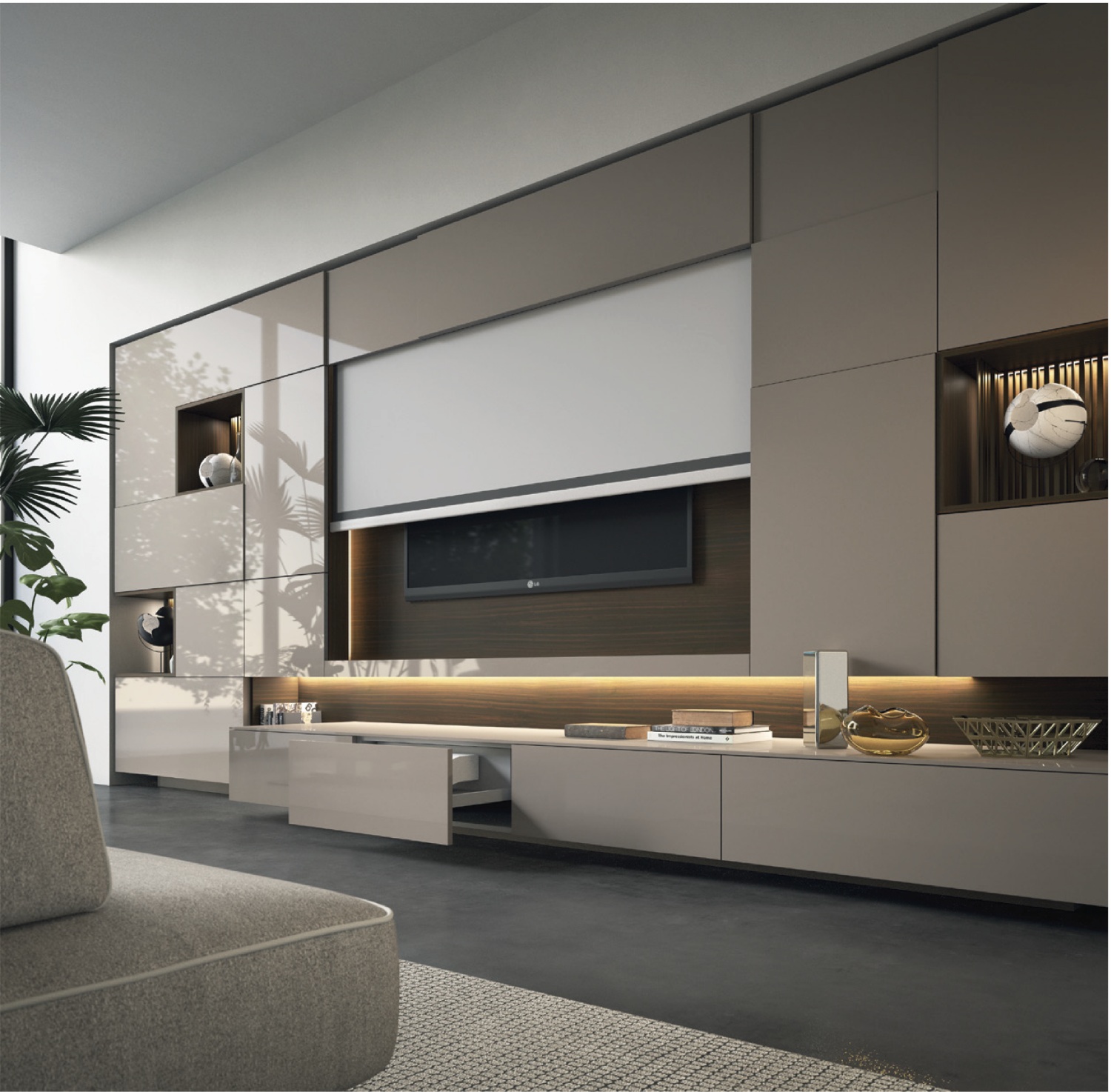 A home cinema screen & each to their own : some prefer TV set, other are smitten with projector screen. Why not choose a combination of both, with a screen that can be unrooled infront of the TV set for those occasions when you are looking for highly engaging image. Each solution is possible and is realised as thought the unit were exclusively conceived for it. 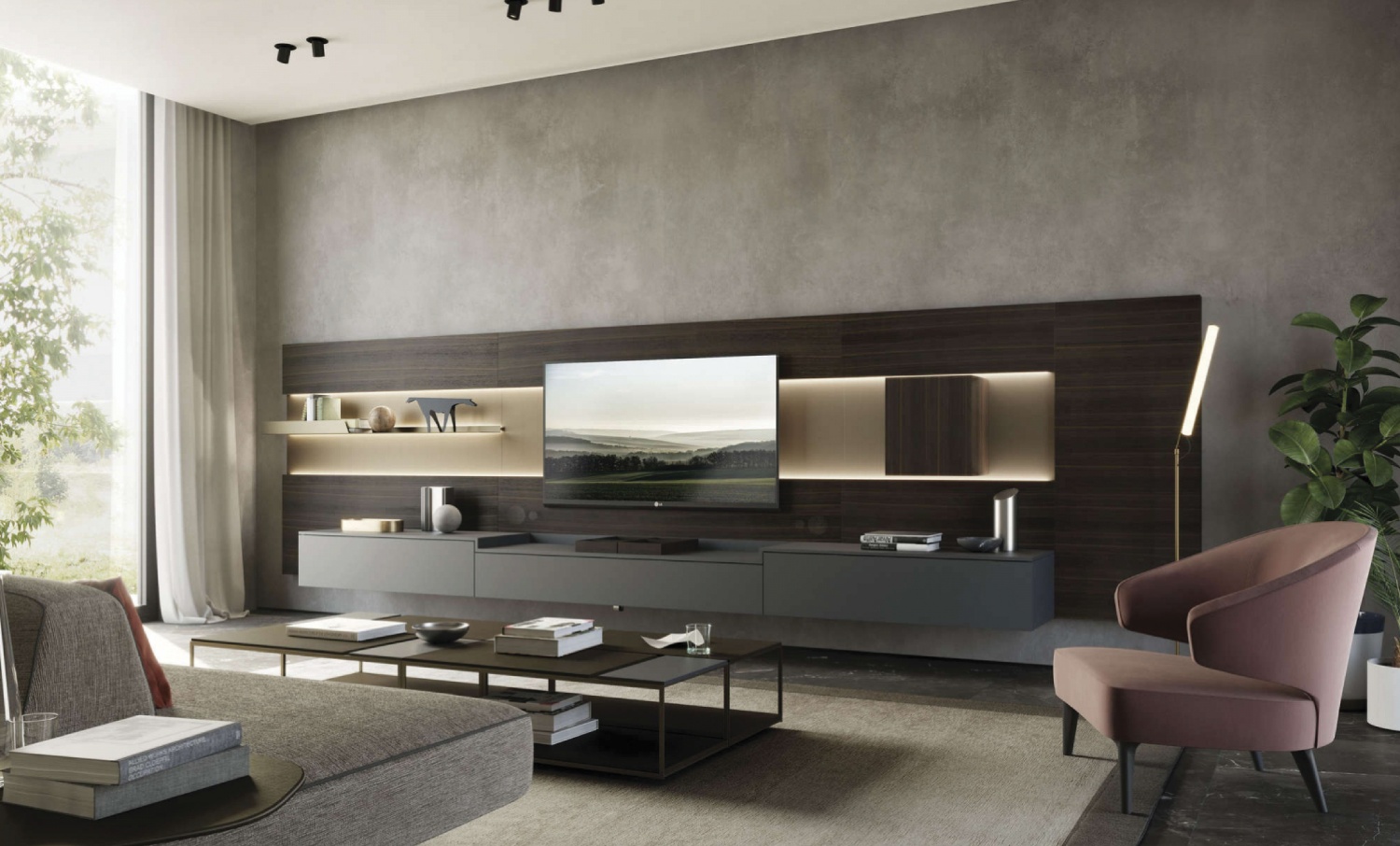 Triplo boiserie is a mosaic which come to life and bestows unexpected sensations upon us. Its modularity means that it can cover entire wall, leaving space for openings, which perforate a continuous surface, suitable for use as light spots , or for hosting equally beautiful objects. It is a composition that shines in its own light. Alternatively, it can be arranged with a central space for the TV screen. 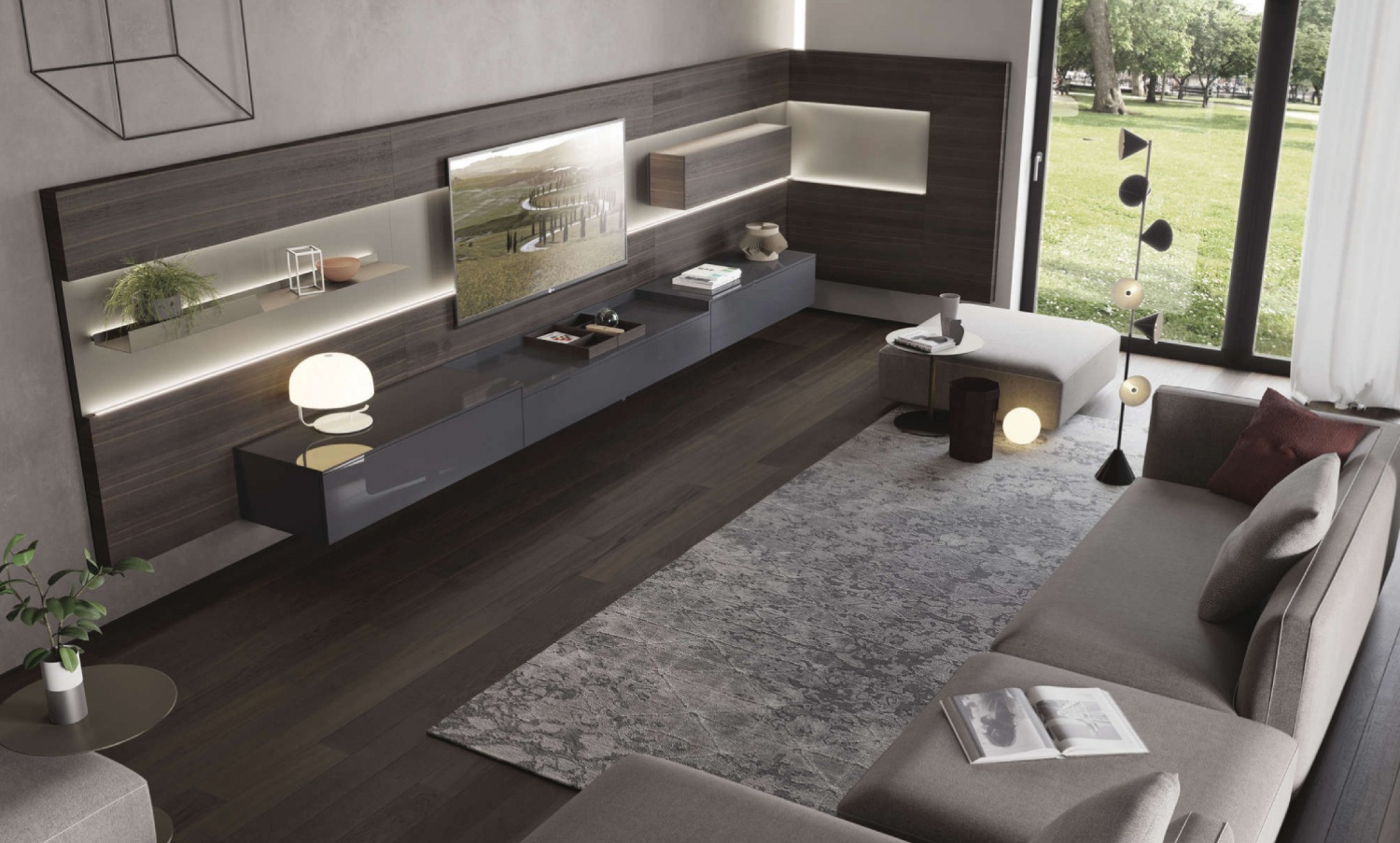 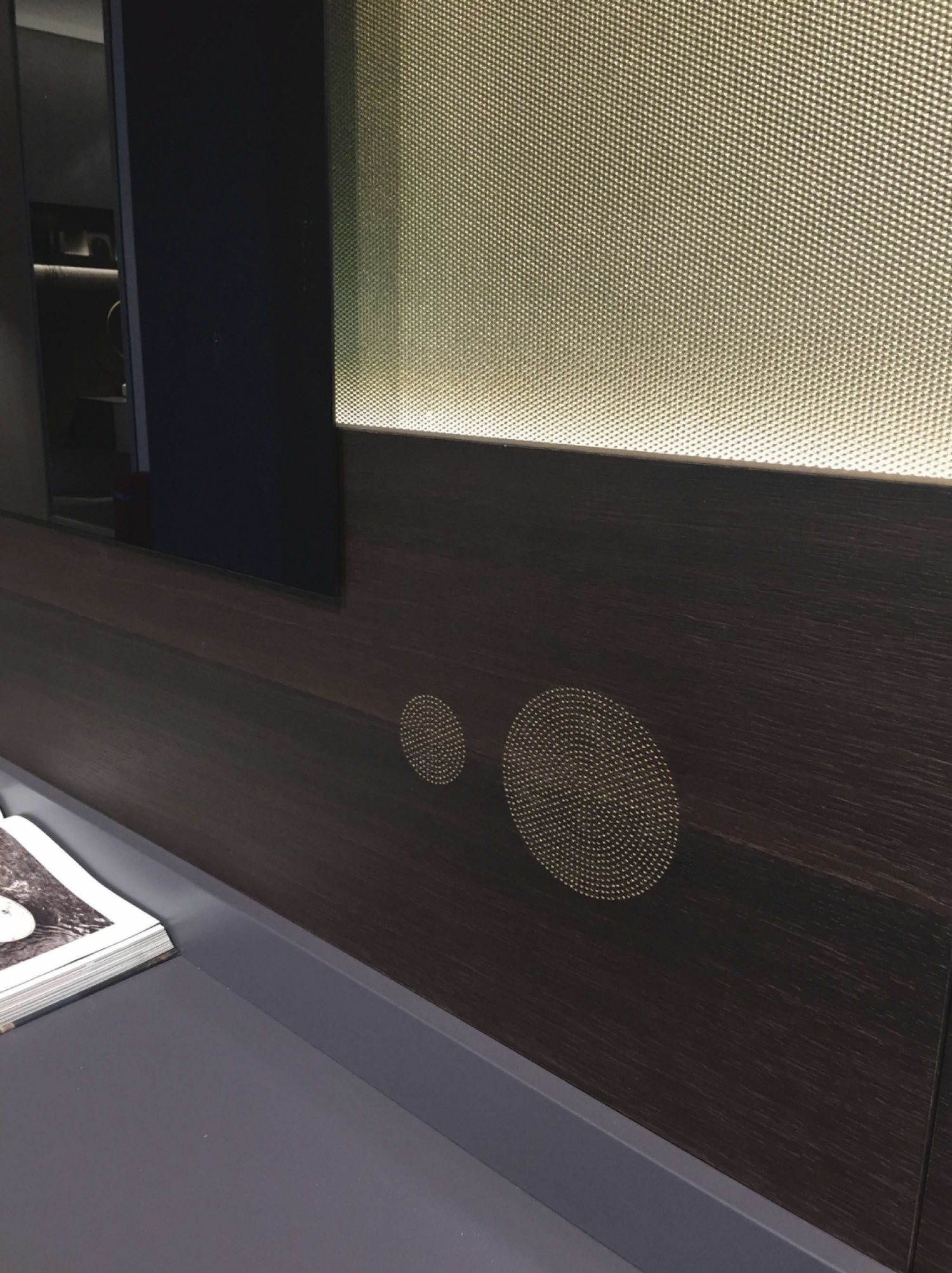 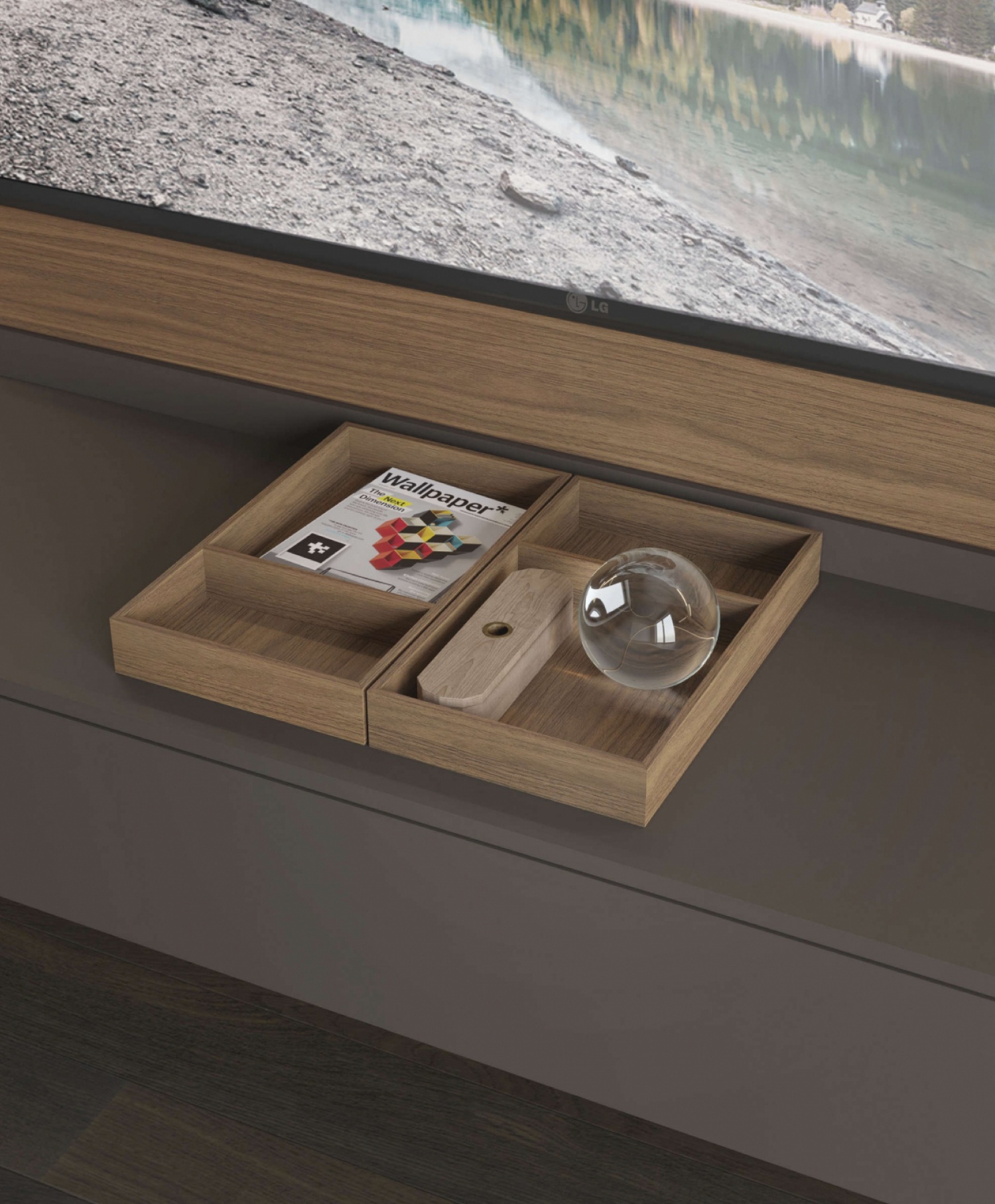 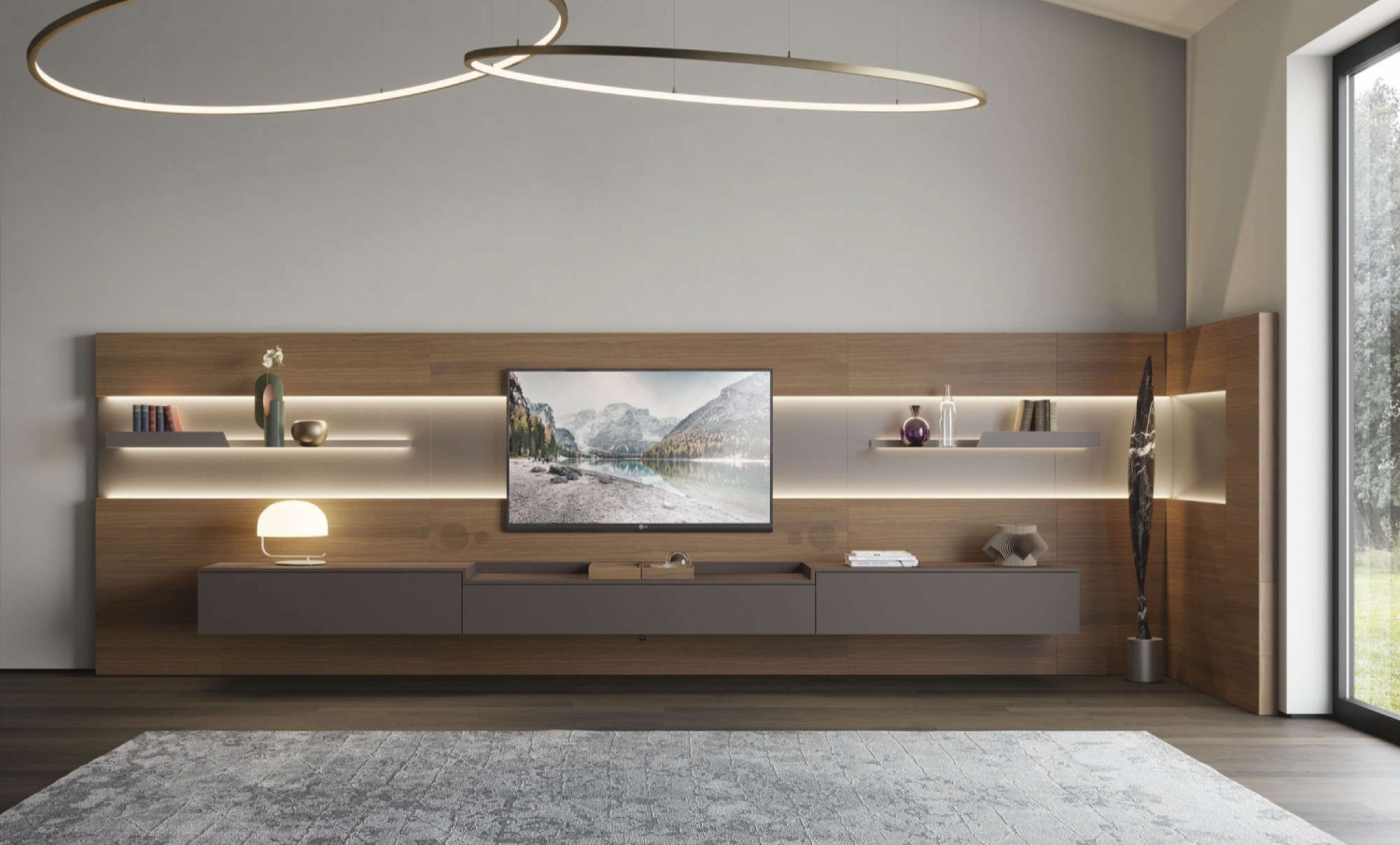 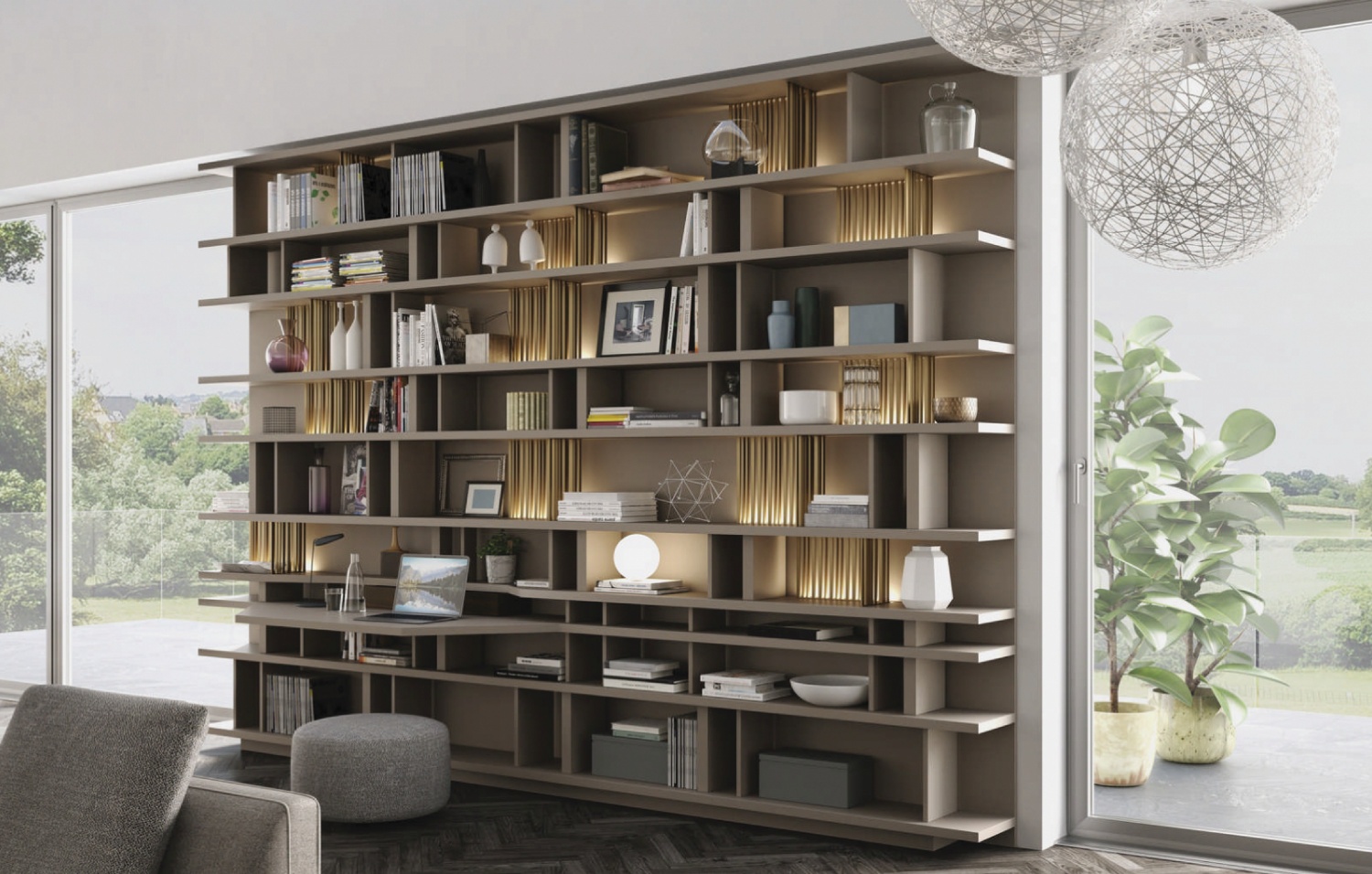 The secret of this bookshelves concealed harmony lies in the masterful blend of composition solution which render it a unique piece each time: large-sized horizontal planes exude strong personality and can be alternated with vertical element of varying thickness and materials, for infinite solutions. 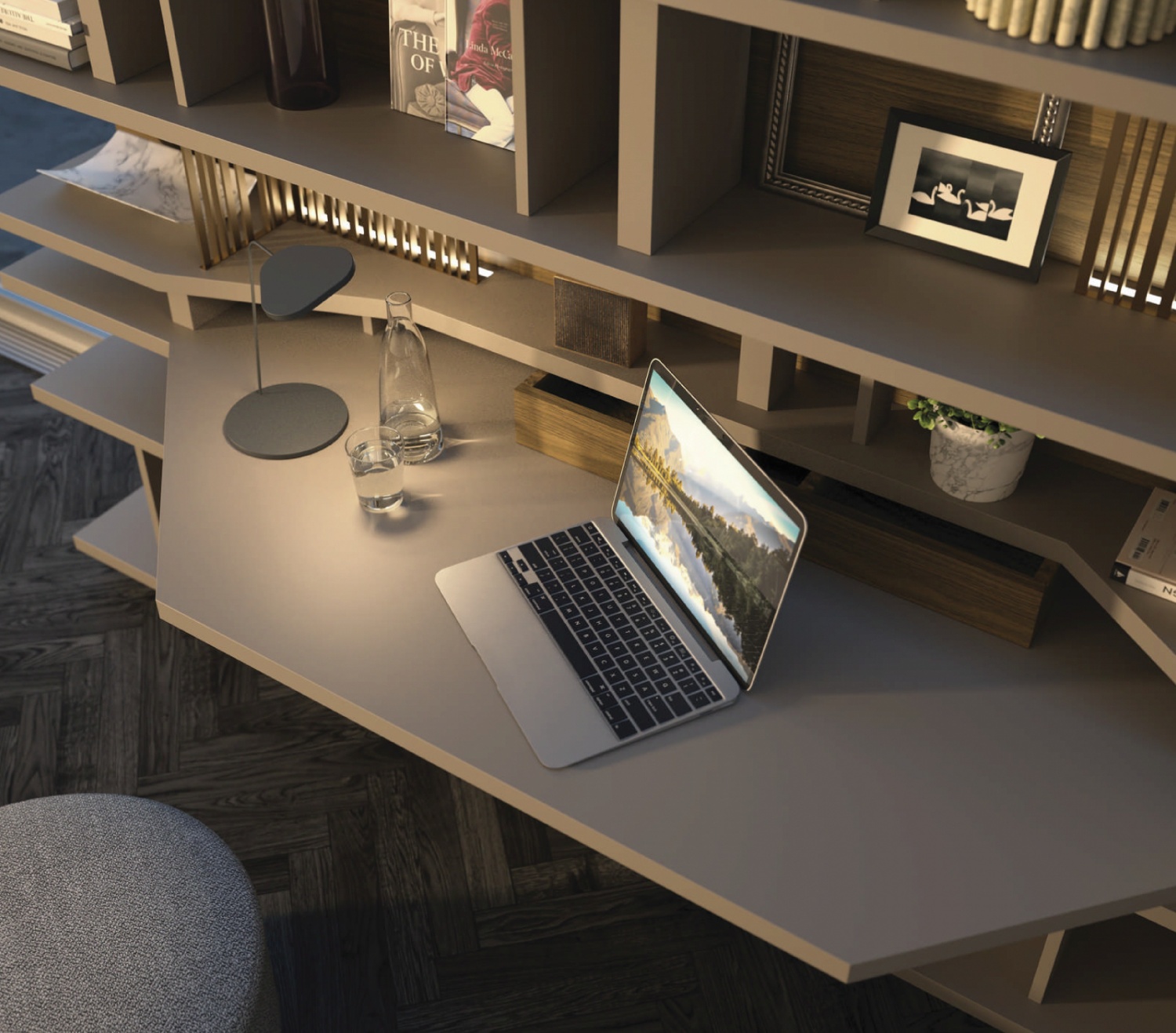 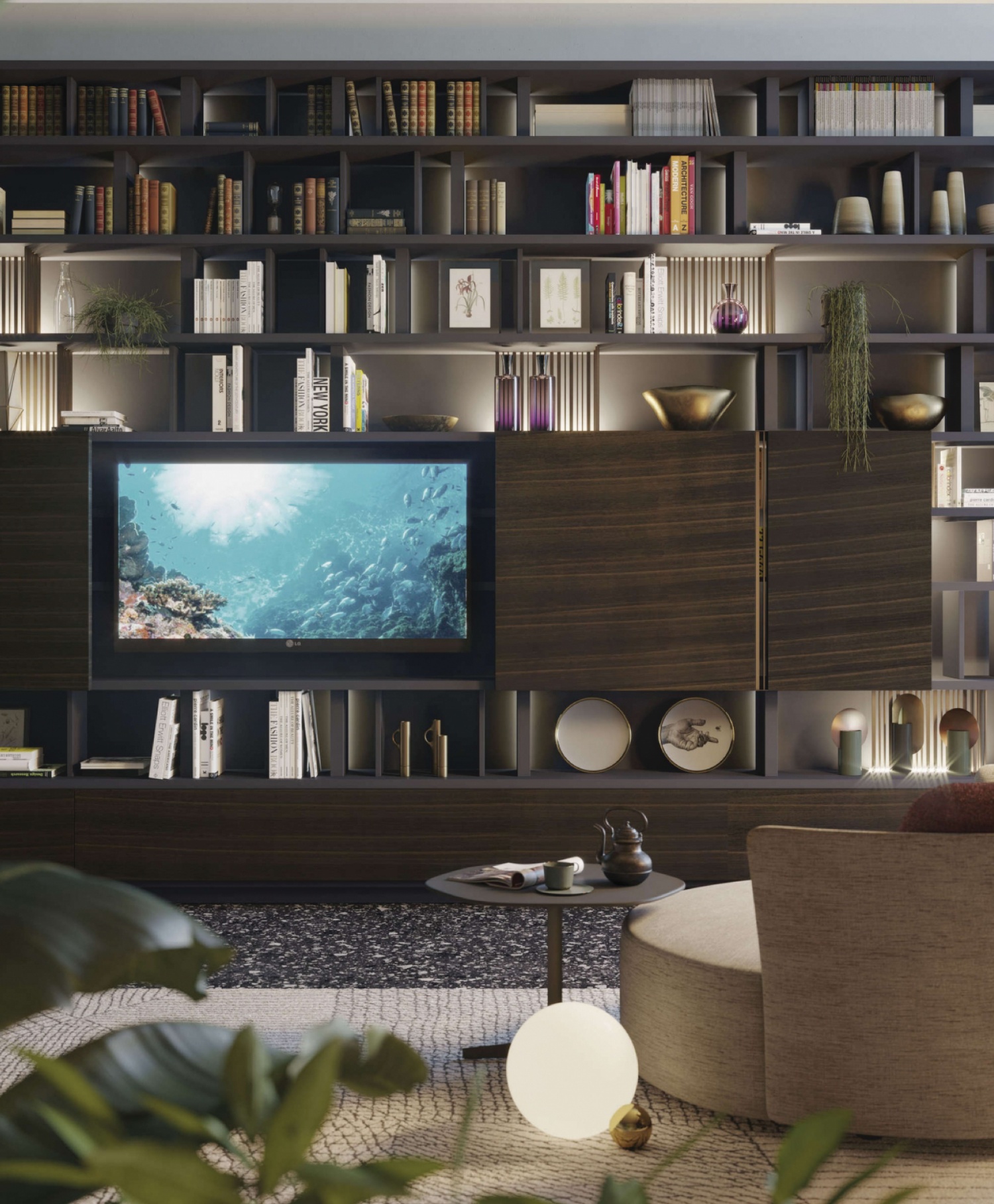 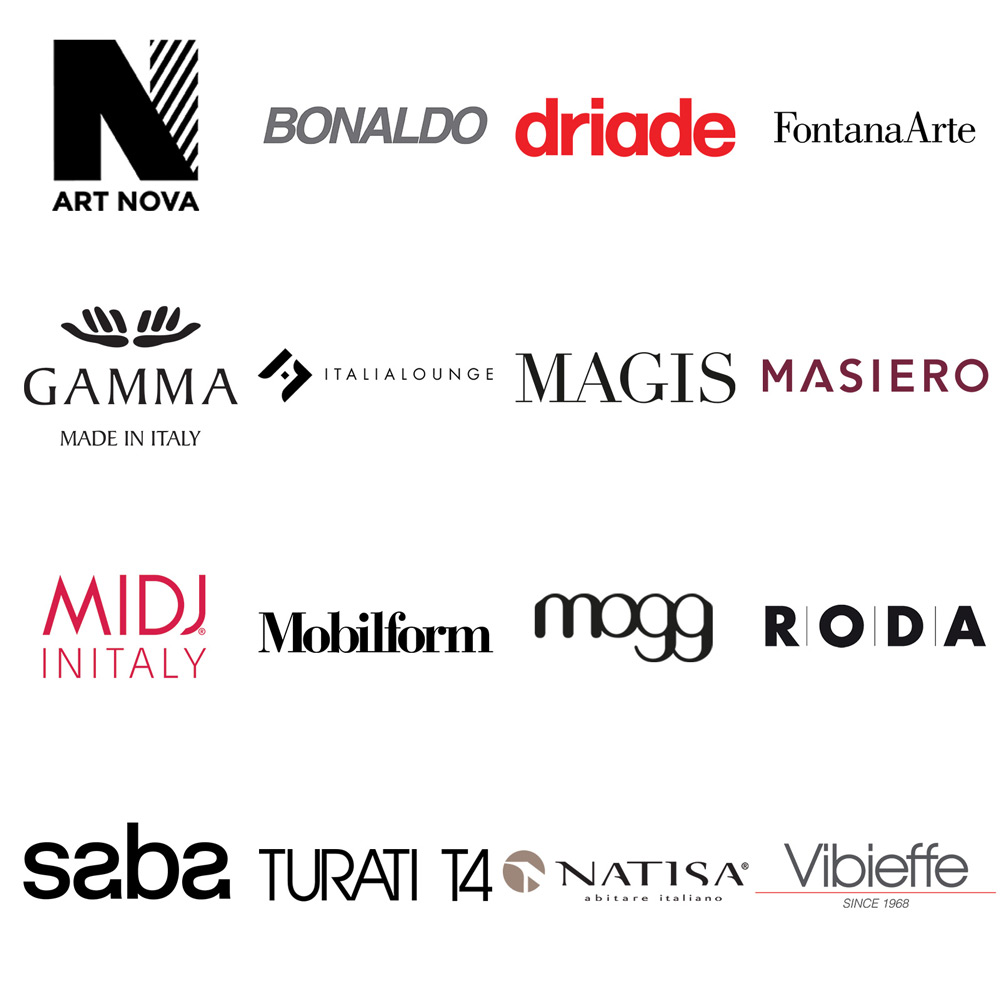